The Nikon Z50 is shaping up to be a very fine mirrorless camera for travellers, vloggers and anyone looking for a more portable version of their Nikon DX-format DSLR. The trouble is, it’s far from the only option at this size and price, and right now its Sony and Fujifilm rivals have better-matched native lens options. The Z50’s main strength is its excellent handling, which it inherits from its bigger Z series siblings, and the combination of intuitive controls with an impressive EVF. Aside from a few niggles, like the lack of a USB-C port or headphone jack, it has a very well-rounded specs and features list. We’ll find out soon if this, plus its appeal to those with existing Nikon lenses, is enough to make it a realistic alternative to the current front-runners in this weight category – the Fujifilm X-T30 and Sony A6400.

Looking for a small, light mirrorless camera with smartphone-beating image quality and handling? You’re already spoiled for choice with new options from Sony, Fujifilm and Panasonic. But now Nikon’s made your decision even harder by releasing the Nikon Z50, its first DX format mirrorless camera.

What’s DX format? It’s Nikon’s name for APS-C size sensors, which are smaller than the full-frame ones found in the Z50’s stablemates, the Nikon Z6 and Nikon Z7. The reason the Z50 is part of the same Z Series as those two cameras is because it’s mirrorless – in other words, its has an electronic viewfinder rather than the optical ones you’ll find in DSLRs – and because it has the same Z-Mount. 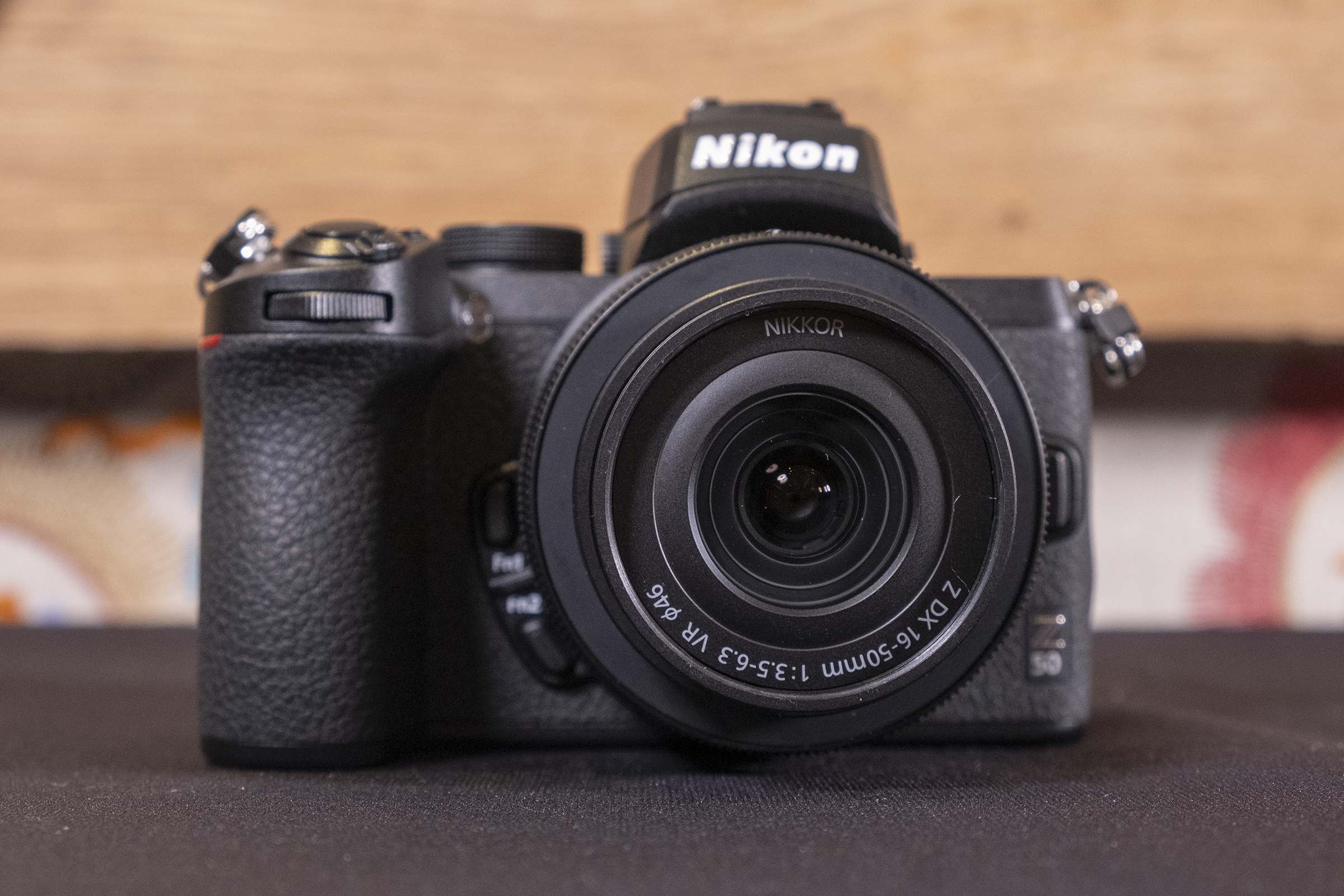 This is all quite confusing, but it means two things for the Nikon Z50. Firstly, it’s effectively a baby version of the Nikon Z6, aimed at what camera companies like to call ‘enthusiasts’ (or hobbyists) rather than pros. Crucially, it also means you can use your existing Nikon DX or F-mount lenses on the Z50 via the FTZ adaptor, which is something you can’t do on any of its rivals.

So is the Nikon Z50 shaping up to be another hit that will continue the Z Series’ hot run of form? I spent a couple of hours with one at Nikon’s launch event to find out.

Pick up the Nikon Z50 and it’s immediately clear who it’s aimed at – DSLR owners who are looking to move to their first mirrorless camera. The reason? It’s got a hulking great grip that gives you much more to hold onto than rivals like the Sony A6400, plus a 2.36-million dot EVF and a generous helping of controls. 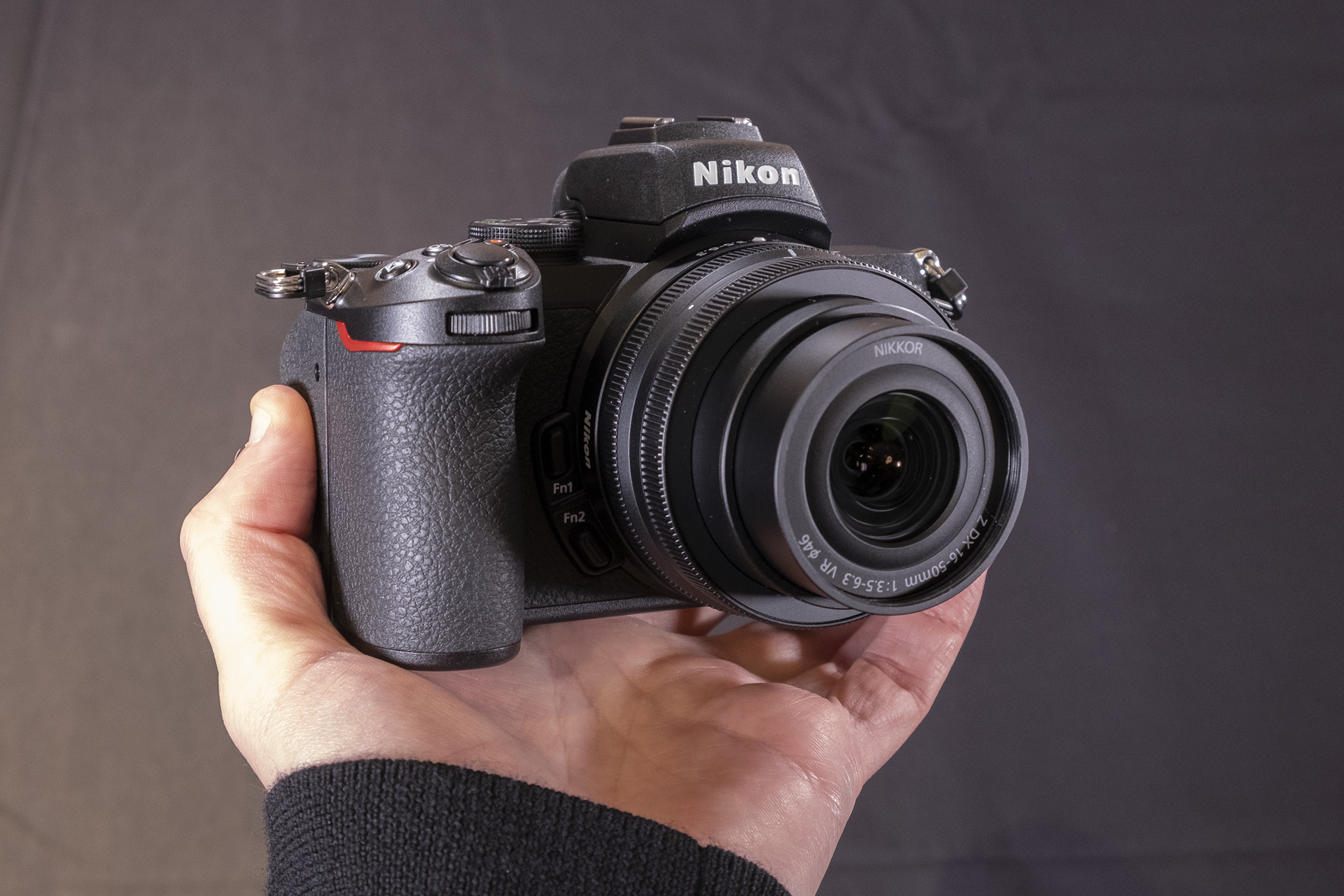 In fact, aside from the unfortunate lack of a joystick to move your AF point and a top LCD, there isn’t much missing from the Nikon Z6 on the control front. You get customisable control dials on the front and rear of the grip, and an ‘i’ button to get to the handy quick menu.

Unlike on Sony cameras, this menu is touch-enabled and makes for a speedy way to quickly tweak settings, like the AF mode. The Z50’s 3.2-inch screen is also large and flips down 180 degrees (as well as up 90 degrees), which is handy for composing shots from tricky angles. 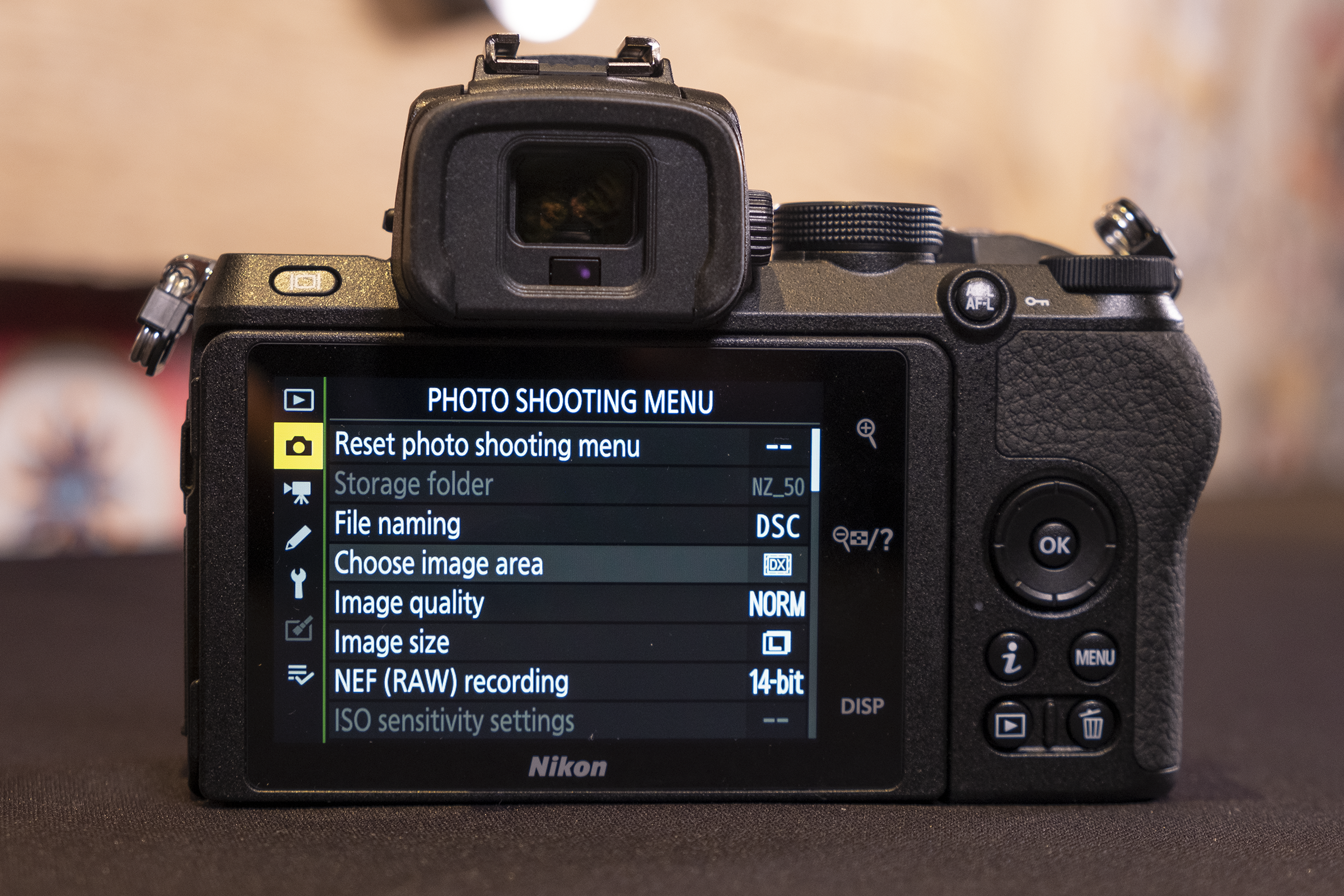 There are a couple of other nods to the Nikon Z50’s other target market: vloggers. On the side, you’ll find a microphone input (although sadly no headphone jack for monitoring audio), alongside a micro HDMI and a microUSB port. It’s also compatible with Nikon’s ML-L7 remote for hands-free control.

Are there any downsides? The Nikon Z50 might even be too light for those who are used to tank-like DSLRs, weighing in at just 450g (with the battery and SD card). That’s a fair bit less than the 675g Nikon Z6, but comparable to the Fujifilm X-T30 and Sony A6400.

It also doesn’t have in-built image stabilisation – while you can find this feature on the more expensive Sony A6600, it’s not common in cameras of this size and price, and isn’t a big miss unless you do most of your photography in low light. Nikon’s new DX-format Z-Mount lenses also have Vibration Reduction (confusingly abbreviated to VR) to help here.

Features – The Nikon Z50 is a strong all-rounder for stills and video, but lacks a unique party trick

It may not have the full-frame sensor shared by the Nikon Z6 and Z7, but the Nikon Z50 has very strong shooting credentials thanks to its 20.9-megapixel APS-C sensor and 11fps continuous shooting with autofocus and auto exposure. 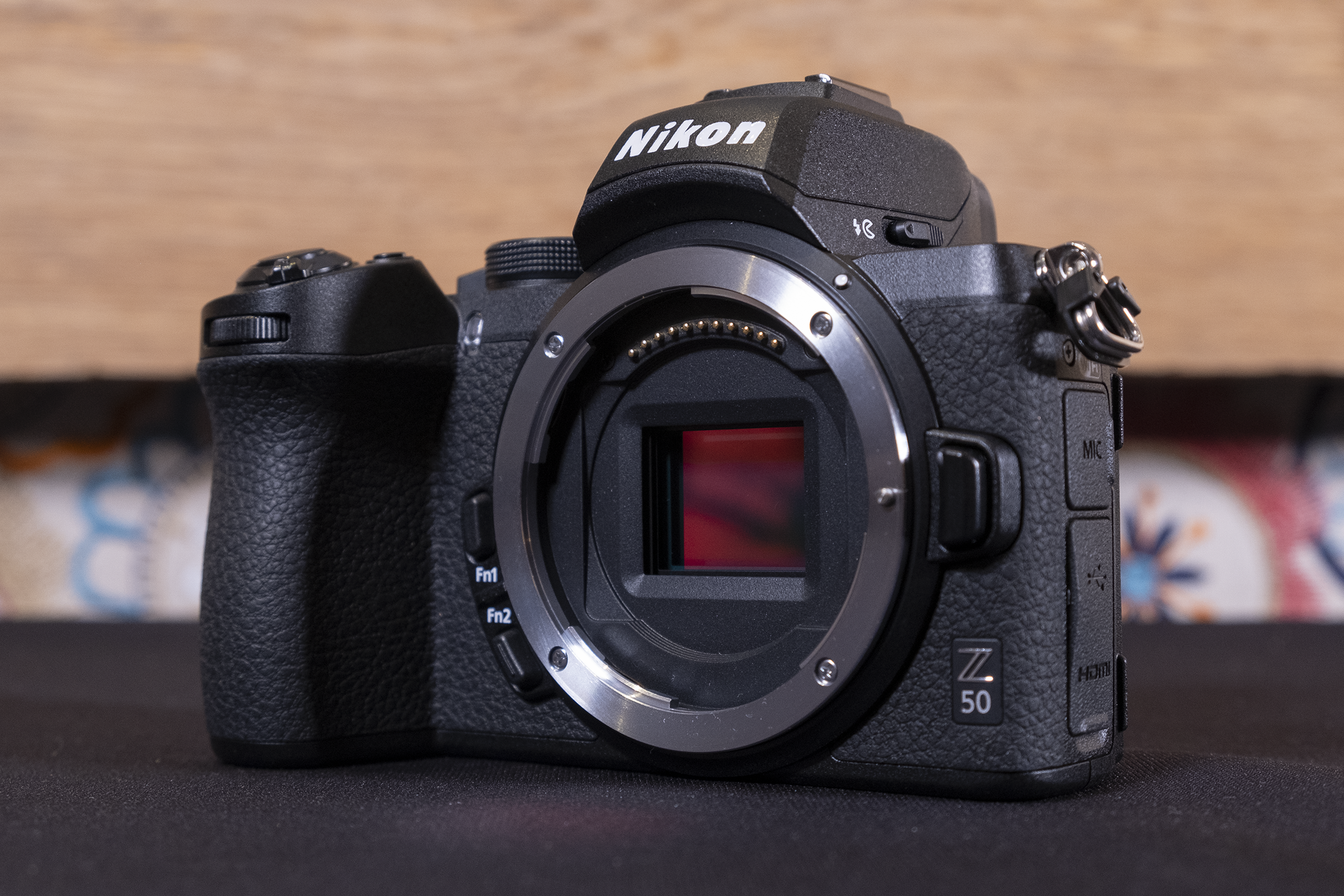 That Z50’s sensor is very similar to the one found in the Nikon D500 and Nikon D7500 DSLRs, which it sits alongside in the company’s ‘enthusiast’ range. One crucial difference, though, is that the Z50’s sensor has on-chip phase detection autofocus, which is particularly helpful when shooting fast-moving objects when compared to the older contrast detection AF.

I wasn’t able to test the autofocus performance in my short time with the Z50, but it’ll be interesting to see how it performs compared to the Sony A6400, which is the current gold standard at this price point. The Z50 has fewer phase-detection AF points (209, compared to the A6400’s 425 AF points) and Sony has a considerable headstart with its Real-time AF tracking, but the Z50 does at least have Eye AF and Face Detection AF. What else can the Z50 do? On paper, it’s a pretty capable video cameras, capable of shooting 4K and 30fps and Full HD at 120fps with no crop. There’s also a timelapse interval timer, plus Wi-Fi/Bluetooth for connecting to the new version of Nikon’s SnapBridge app.

There are two other main differences from the Nikon Z6. Rather than the pricier XQD cards, the Z50 takes standard SD cards in its single slot. And it also has a pop-up flash, which you can find in the side of the EVF.

The Z50 also takes a new rechargeable battery called the EN-EL25, which is apparently good for around 300 shots. That’s a fair way off the Sony A6600’s 720 shots, though that’s unusually generous for a mirrorless camera, and you can charge the Z50 in-camera via its microUSB port. While these are relatively affordable as part of the Nikon Z50’s bundles, they’re more like travel workhorses rather than the exciting primes that street photographers crave. Right now, Fujifilm and Sony have a significant edge when it comes to adaptor-free glass that’s been specifically built for their mid-range mirrorless cameras. 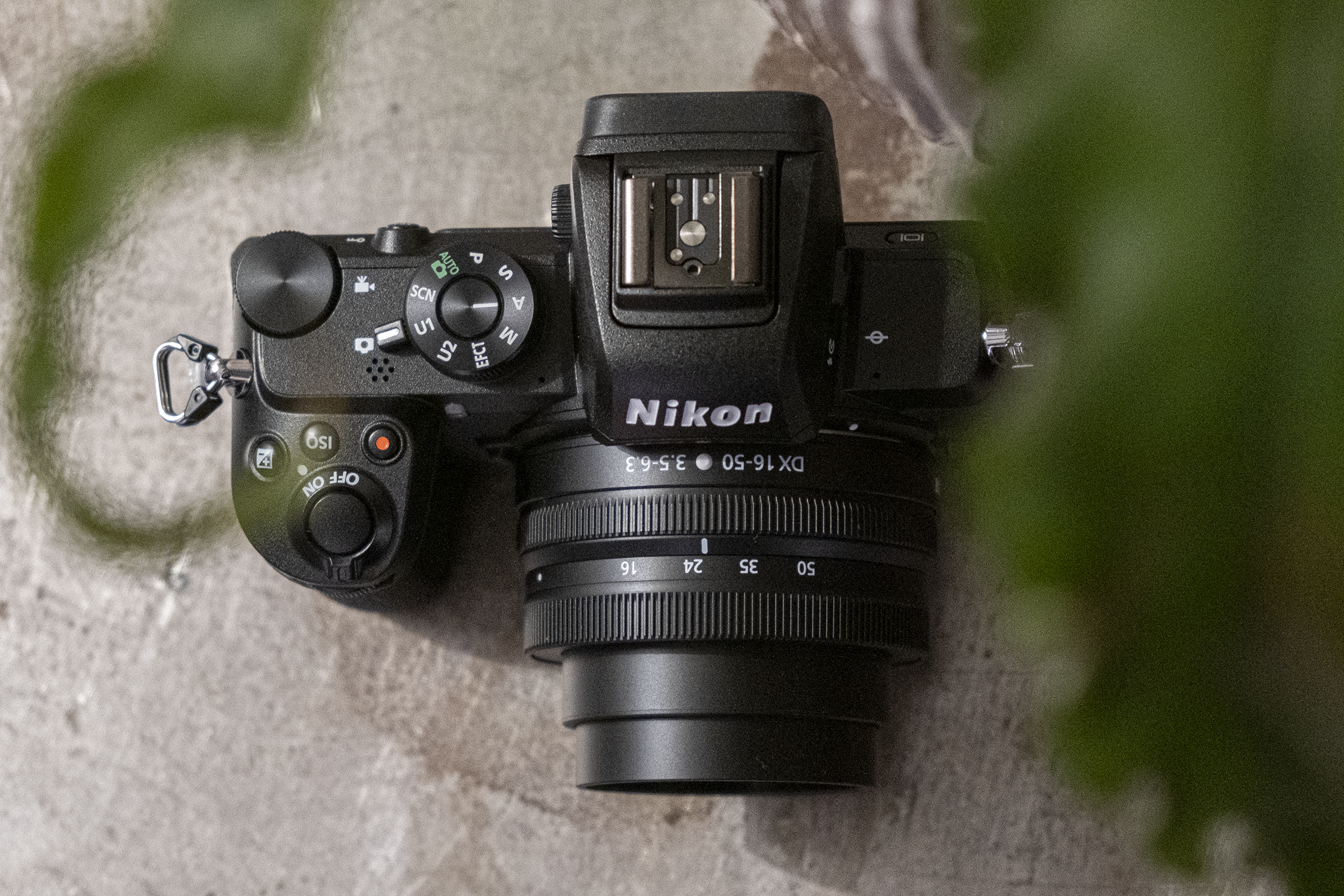 Right now, this means the Nikon Z50 is most likely to appeal to those who have existing Nikon lenses, whether that’s DX-format, F-mount or Z-mount glass, with the latter scenario only likely for those looking at the Z50 as a smaller backup camera to their Nikon Z6 or Z7.

The Z50 is compatible with all Z Mount lenses without an adaptor, but you’ll need to factor in the 1.5x crop factor and their price tags. The cheapest Nikon-made Z-mount lens right now is the Nikon Z 50mm f/1.8, which costs £599.

The Nikon Z50 is shaping up to be a very fine mirrorless camera for travellers, vloggers and anyone looking for a more portable version of their Nikon DX-format DSLR. The trouble is, it’s far from the only option at this size and price, and right now its Sony and Fujifilm rivals have better-matched native lens options. The Z50’s main strength is its excellent handling, which it inherits from its bigger Z series siblings, and the combination of intuitive controls with an impressive EVF.

Aside from a few niggles, like the lack of a USB-C port or headphone jack, it has a very well-rounded specs and features list. We’ll find out soon if this, plus its appeal to those with existing Nikon lenses, is enough to make it a realistic alternative to the current front-runners in this weight category – the Fujifilm X-T30 and Sony A6400.

A ’hands on review’ is our first impression of a product only – it is not a full test and verdict. Our writer must have spent some time with the product to describe an early sense of what it’s like to use. We call these ‘hands on reviews’ to make them visible in search. However these are always unscored and don’t give recommendations. Read more about our reviews policy.

Mark was previously acting editor of Stuff.tv, as well as features editor and reviews editor on Stuff magazine. He has contributed to a variety of publications, including The Sunday Times, The Daily T…